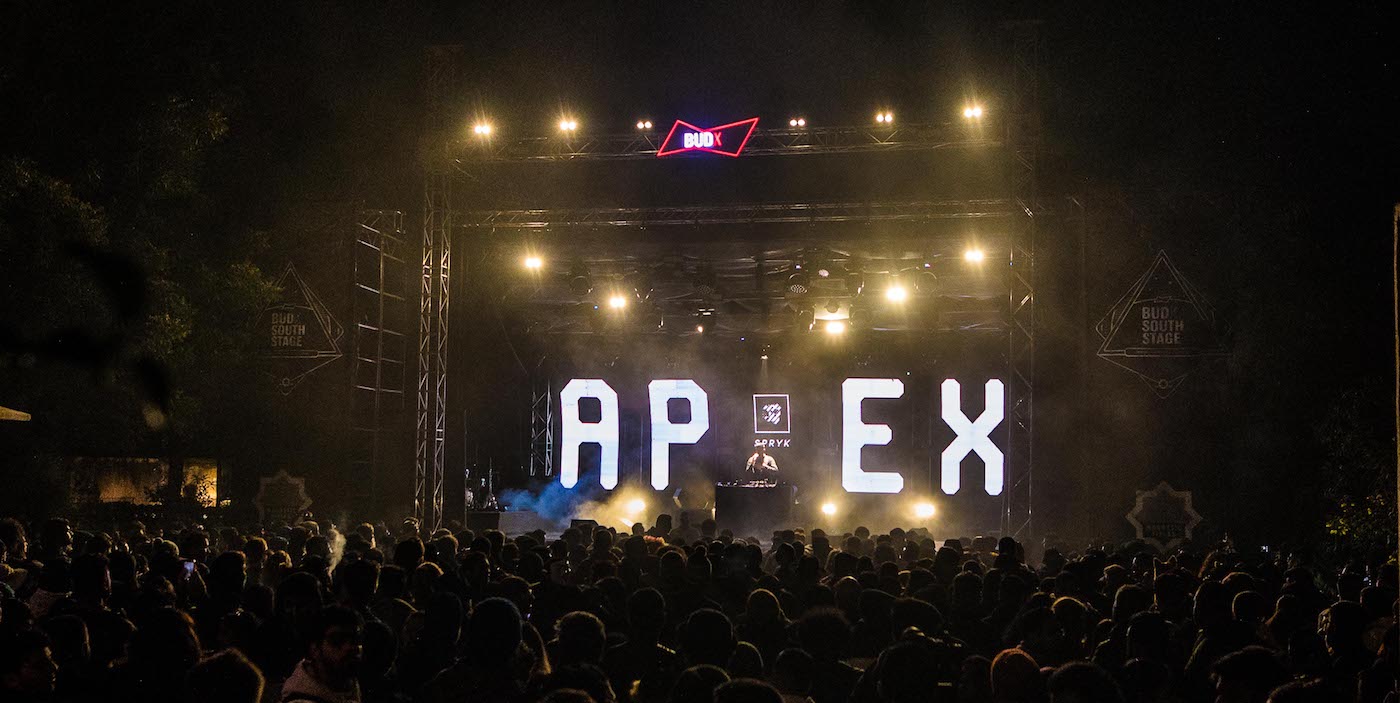 To understand how APEX came to be, it’s important to start with Tejas Nair a.k.a. SPRYK’s journey of discovering music and technology itself. Growing up in Bombay in the early 90s, like many of us, Nair was exposed to and influenced by the music his parents listened to at home – mostly Carnatic, jazz fusion and devotional sounds. With the arrival of MTV in 1996, “suddenly, everything about my taste in Indian music started to feel very uncool and not ‘global’. Younger-me thought hip-hop was cool, which was great, but it sorta disconnected me from my own roots. That was my transition from practicing classical music, to listening to it being sampled and used by producers like Timbaland and others in American pop culture,” the multi-faceted music producer explained.

It wasn’t long before he dug deeper and discovered electronic dance music that was complex and intelligent, delivered by the likes of Squarepusher, Aphex Twin, Boards of Canada, and David Tipper. He would try and deconstruct the tracks on his Acer laptop using cracked software and then attempt to put the sounds back together. “Back then, this wasn’t something that I would put into the box of music, as per traditional definitions, but I was so intrigued by how they made it. These experiments led me to discovering artists who blend different worlds together to create larger narratives, larger picture, larger stories… that’s how I came across artists like BLOT!, whose sound back then was European techno meets early Bollywood sampling, and attended an early audio-visual gig by Nucleya (as one half of New Culture Mashup with Thiruda) at the Mumbai Times Café.”

All of these influences got him wondering about how performances came together in their full form – “the design of the music, its delivery, the story it rides on, the packaging and its presentation… is it an audio-visual show, a street gig? There was nothing like that while I was growing up, and I was constantly exploring ways of putting such a thing together” he added. This appreciation for creating a musical experience led him to sign up for a course in digital filmmaking and audio production at SAE in 2011 – first in Bombay, and later at Byron Bay in Australia, where he picked up the tech chops for audio production and began dabbling in visuals for the sounds that he was producing. It gave him a break in Melbourne, where for the first time, he was commissioned as a music producer for advertisements, video games, broadcasts and so on. He brought back all of these experiences to India releasing his debut EP ‘Emergence’.

“Through SPRYK, I was applying all my learning in the digital and commercial world to building projects that I could only dream of, and finding ways to do it without a ridiculous amount of money to build a tech experience around it. It was a sweet spot for how I can present my music in interesting ways,” Nair explains. This led him to create interesting tech experiences and installation artwork at early editions of Magnetic Fields Festival, including the ‘Cymatic Tonoscope’, which enabled you to visualize sound vibrations in water, and ‘Beyond Within’, a much-talked about simulation of the outer space using Oculus Rift. All of these collaborations happened through his ventures, Vitamin-E and Tessellate Studios, which were producing AR/VR film experiences at the time.

These ideas tied together in 2018, when Nair collaborated with Aniruddh Mehta, a.k.a the big fat minimalist, a graphic designer and visual artist, to create ‘Strange Movements’ – a live audio-visual experience that debuted in clubs across the country that year. “This was my first real opportunity to build a show like that. We had lights, sights, and this heavy technical setup – not just a mixer and a projector anymore. I was learning how these systems were inter-connected, and how to run things in sync so as to deliver a flawless show. But even this technology was nowhere as advanced as what we used for APEX,” he explains.

The concept of APEX began with a soundtrack and the imagery of humanity’s forever-pursuit of the ‘apex’ in science and technology. The idea was to translate how, in an incredibly short period of time on this planet, human beings have gone from being Neanderthals to discussing space colonization. To explain this phenomenon, Nair references the evolution of the cursor: “The first time we used the cursor on a computer – and that wasn’t too long ago – the UI was quite glitchy, especially when we dragged it around too fast, and there was a left and a right click, concepts which are almost obsolete in the world of haptic technology today. APEX is an artistic interpretation of all these stories and experiences.”

In fact, the cursor’s story was represented as a near-holographic experience in the set of APEX at Magnetic Fields 2019, where it debuted. This emulation of holographic visuals was achieved by using scrim, a thin, netted fabric, which absorbs light really fast and is usually grey or black in colour. When stretched out in a darkened room, it is nearly invisible, giving the illusion of visuals being suspended in thin air.

With the sound and visuals ready, and about three weeks to go for the festival, Nair worked closely with Yash Chandak, a visual artist, and Naveen Deshpande, on the lights. They learnt that the performance was set to happen in the evening at the BUDx South stage. This information helped them figure out the style and scale of it, kickstarting production work. “The LED setup was standard for all the performances on that stage, so we had to work with it. Besides that, the stage was broken up by these vertical pillars,” explained Nair when asked about the team’s approach to set design. “We would have a period of about 10 minutes between sets, all with people standing right in front of the stage waiting to be entertained. So, there’s a limit on the number of people and equipment that can be moved around to prepare the stage for the performance. Amandeep Pablay, who led set design, came up with the idea of using the Kabuki Drop system for the scrim, which is akin to a curtain drop. Given its use for a dramatic effect to unveil cars at automobile shows, we also used it to finish the set with. With all the lights coming on at the end, a lot of people would finally be able to the whole set in its entire glory and for all the work that went into it.”

Before the covid-lockdown, APEX was set to go on tour, visiting venues and festivals, such as the HomeGrown Street festival (which is expected to happen in October 2020 in Mumbai). But with a viral infection on the loose and the country just coming out of lockdown, the schedule has certainly changed. True to his ideas of changing with the changing times, Nair says that although there is no clear touring schedule in place at the moment, “the situation has presented us with an opportunity to reimagine gigs and other social gatherings. I hope to find another way to present the show in a format that works with the current state of things.”

When things do get better for live events to resume, finding the right kind of setting will be crucial to recreate the entire experience. “A lot of it would be made possible through brand funding. The projector, the scrim, an LED wall, a big sound system, a stage with five people working to put the show together – it’s going to cost money. So we are identifying brands whose vision aligns with ours.” Nair doesn’t see the set being performed at regular nightlife venues, and is looking at modular blackbox spaces with high ceilings so as to recreate the festival experience as much as possible. Venues in Bengaluru, Delhi and Mumbai have been identified and the hunt is on for such spaces in other cities like Kochi and Jaipur as well.

When asked about how the collaboration would play out in future performances, he said that performing as a trio (Tejas, Yash and Naveen) would be ideal, but they are exploring formats to accommodate schedules and logistical limitations.