Jojo Mayer: ‘Nothing New Can Be Created Without Deviating From The Norm’ 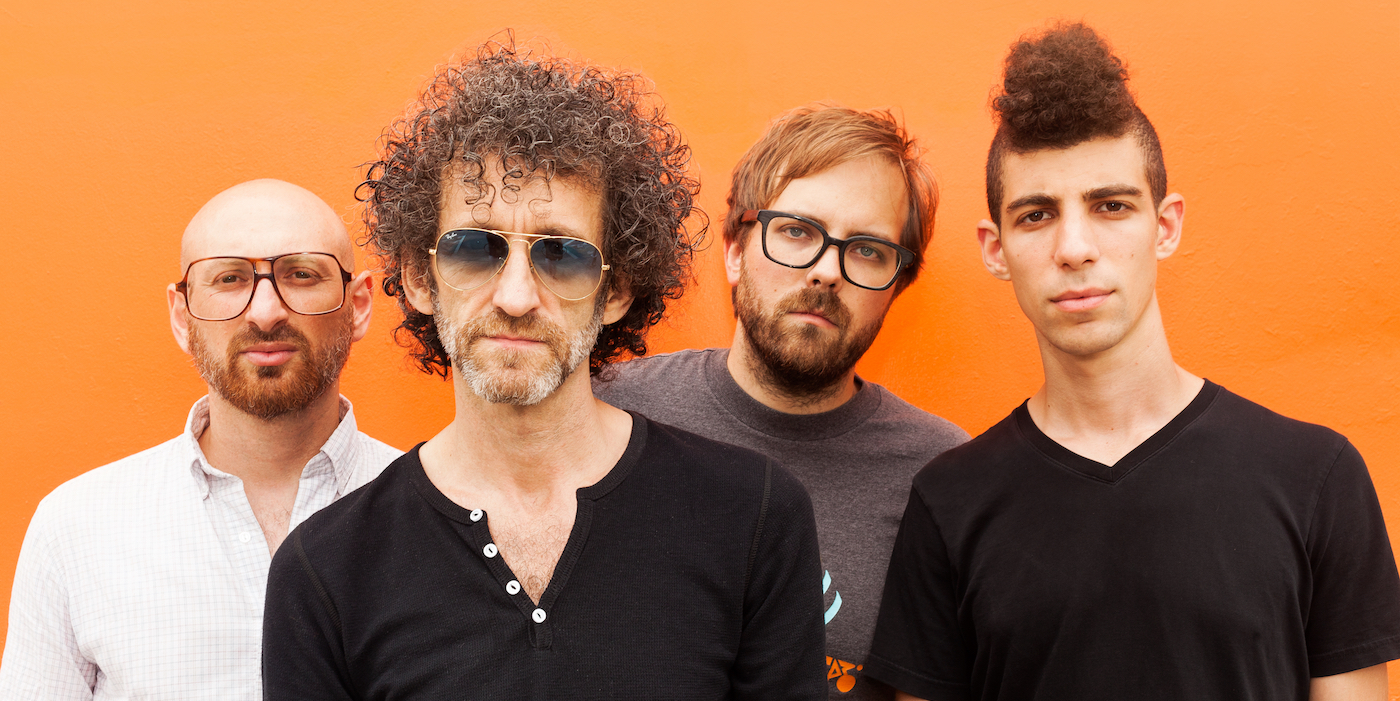 “NERVE sounds like electronic music, but it’s not. It doesn’t sound like jazz or rock, but it is,” states the bio of NERVE. To comprehend this “sonic alchemy”, as the band’s central figure and acclaimed drummer Jojo Mayer calls it during his interview with me, it is important to trace back the seed of the quartet’s sound.

Mayer was already a formidable jazz drummer as a teenager, touring with pianist Monty Alexander, when he started to feel that he was playing the music 40 years too late. The genre that once stood for progressiveness had turned conservative, reduced to a set of rules and structures by its very academia. “Nothing new can be created without deviating from the norm. And when it comes to what is labeled as jazz today: I think if you’re looking for radical innovation like Armstrong, Parker, Monk, Miles and Coltrane, you might have to look somewhere else,” he declares as I ask him to elaborate.

The turning point came in 1994. “I was in Glastonbury, playing with Meshell Ndegeocello, and on the side-stage there was like a jungle party, tons of people dancing to beats that, to me, I would more closely associate with Tony Williams’ ‘Emergency!’ ... And I thought, now I cannot afford to ignore this,” he told DownBeat magazine. Almost instantly, Mayer started consuming the breaks associated with drum ‘n’ bass and jungle, and embarked on the mammoth quest of physically replicating the drum machine’s inhuman idiosyncrasies, only to be confronted by his human limitations.

In the process, Mayer developed a feature uniquely his own – an unparalleled ability to create the illusion of playing like a machine, aided by his aforementioned virtuosity and elevated by the very human element that seemed to restrict him at first. “I could add the element of my emotionality and spontaneity to that genre,” Mayer said in his Tedx talk.

When I launch a near-accusatory probe into why he took away the drum machine’s job, Mayer responds: “My intention is not to take away the machine’s job. My interest is the creation of new syntax. New musical vocabulary that was created by interacting with machines created new artistic opportunities and new viewpoints for me. My work turned out to be an examination of the legitimacy of a human performance in the digital age in general and in particular at the onset of A.I. The choice of the tools, electronic versus acoustic, has become less important. What has changed is a better understanding of cultural values and human identity. I believe today it is no longer a question about the legitimacy of a human performance versus a machine performance. What I learned so far is that the most important question today is about the legitimacy and the values of any performance, be it by human or machine.”

The Swiss drummer’s new sound found its first home in the underground clubs of his adopted home of New York City, when he founded the weekly parties ‘Prohibited Beatz’ as a platform to showcase electronic music. The event soon became a melting pot for forward-thinking DJs, MCs, rappers, visual artists and musicians – from which emerged a group with Mayer on drums, John Davis on bass and low-end manipulation, Jacob Bergson on keys and synths, and Aaron Devezie on real-time sound deconstruction, who also doubled as the band’s live engineer.

According to Mayer, “the underlying concept of NERVE is collective improvisation. It’s more sonic alchemy. Creating parts and song structure on the spot rather than the traditional template of soloing over premeditated song structure.” In ‘Changing Time’, the notably insightful documentary about him, Mayer recalls being asked by a New York Times journalist what the band was called. Reluctant to admit it was just a jam session, Mayer did what he does best: improvise. Conjuring a name out of thin air, he christened the group – and NERVE was born.

Now, two decades later, while Mayer is lauded as a modern drum god, NERVE’s music still remains difficult to pigeonhole, in spite of being enjoyed world-over for its spontaneous rendering of drum ‘n’ bass (in all its experimental variants) on “real” instruments. They’re often booked at jazz venues but wouldn’t want their audience sitting down; they’re virtuosos but wouldn’t want the listener lost in the technical proficiencies. “I find our audience is a forward thinking and pretty eclectic mix. Some jazz audience, some electronic audience, some art people and some drum fanatics. What they have in common is a taste for high-energy music and an unusual concert experience. When it comes to audience reaction, I tend to go with the flow,” says Mayer.

Even after building a brand of themselves, the collective’s inquest into the legitimacy and values of any performance (“by human or machine” as Mayer would insist) continues. In my opinion, a significant moment in this exploration comes at the end of their 2017 self-titled album with the track ‘After The Flare’. “While we were still working on the mixes of ‘Nerve’ in the control room of the Bunker Studio, the main recording room got prepared for a jazz session the next day. I sneaked into the room and started to play on the jazz kit that was already miked up for the session. John popped in and picked up the acoustic bass and Jacob came in and joined on the piano. We jammed for a few minutes and just had fun. When we went back to the control room Aaron said, ‘Hey, I recorded that!’ So we listened back to it and decided to put it on the record as an epilogue.”

Expanding upon the track’s sonic palette with a full-fledged album a year later by the same name, the band’s departure from their signature sound for conventional jazz instrumentation felt uncharacteristic. However, with its rebellious refusal to be confined to the predating structures, the record was refreshing, appearing as a rightful outing especially in light of the ”examination of the legitimacy of a human performance” Mayer claims to pursue. “It was mainly an experiment to see if our proprietary improvisational concept and approach to creating music in real-time would still work outside of our usual electronic environment. If we can survive without our electronic toys,” says Mayer. “I came up with the title ‘After The Flare’ as a hint of what we would possibly sound like if a solar flare wiped out all electricity on earth. And that was the spark that lead to the concept for the following acoustic album.”

In ‘Changing Time’, Mayer mentions how change is the only thing he feels comfortable with. Aptly, NERVE renewed their approach yet again for the upcoming album ‘Music For Sharks’, from which they released a single just last month. According to Mayer, “With ‘Music for Sharks’, NERVE returns to an electronic sound after an excursion into our all acoustic and entirely improvised last record. But this time it’s another 180 degree deviation as the focus is no longer on performance or improvisation, but premeditated composition. The process of making it was much closer to making an actual electronic record than any previous NERVE record.”

Of course, NERVE’s music isn’t just a clinical exercise in self-conceived philosophies. As masters of their craft, the quartet are able to synthesise a varied mesh of influences from their lives and beyond, whether soundtracking the past moon landings in ‘Lunar Tribute’ or exploring technological futures in ‘Ghosts Of Tomorrow’; the group maintains an emotive and immersive quality throughout their repertoire – even as they prepare to release an album with each track dedicated to and titled after a type of shark. “Yes, that's the original incentive: to create a cinematic experience,” Mayer remarks. “It's a concept piece that gravitates around programmatic moods and atmospheres inspired by a variety of sharks. They are the protagonists in the music."

The interest in sharks, deep enough to create an album around them, can be partly attributed to Mayer’s intriguing childhood, which included having crocodiles, snakes, reptiles and spiders as pets. “Many boys have an obsession with dinosaurs, with me it's sharks. It probably started when I saw the shark-pool in the movie ‘Thunderball’. I'm still fascinated with them and went on cage dives with Great Whites while in Africa. And I have a rather extensive collection of toy sharks.” In a moment that showcases the band’s symbiotic relationship, it was actually Devezie who suggested the idea about making a record about sharks, while Mayer, along with his friend and designer Chrisitan Calabro, devised ways to incorporate them in the artwork.

Even if you just consider the albums he has released with NERVE since 2015, Jojo Mayer has done more exploration than many artists do in their career – and NERVE is just one of his outlets (though, arguably, the most interesting) beside his relentless schedule as a session musician, as an author of prolific educational material, and as the host of drum clinics around the world. Naturally, I was curious to see if his stance on jazz and innovation in general had updated – especially so after the acoustic excursions in ‘After The Flare’. Mayer responded: “Well, I think it’s more complex than that. The raging co-opting of artistic and cultural values by corporate interests and the resulting cultural flattening is a big problem. Today 5% of music performers make 85% of the profit. They have most of the visibility. The other 95% of musicians operate mostly under the radar. Innovation happens everywhere but it is only visible to a small group of engaged and curious music lovers. It’s not desired in the remnants of the music industry, where the artistic decisions are no longer made by humans but by algorithms and recommendation engines designed to maximize profitability. Nobody wants to take a risk anymore. And there’s no innovation without risk.”

So where does the decades-long effort and innovation led by NERVE, that I’ve come to know and love, fit into this semi-bleak vision of the musical landscape? To what purpose is the band’s constant foray into shaking things up? Mayer’s answer was one filled with humility, gratitude and the same artistic curiosity he exhibits in all his strides: “As an artist I’ve been given the privilege to inspire people to grow. One aspect of this is to spark curiosity. For instance, curiosity for truth, the full potential or new narratives. Another aspect is to connect people and initiate dialogue. If I can accomplish this, my work is done.”

**Jojo Mayer / NERVE will be touring Nepal and India between September 11-15, with live shows in Kathmandu, Mumbai, Bangalore and Gurgaon, courtesy Eleven11production, Find the tour dates below**