"No Expectations, Only Surprises": Inside Berlin’s Infamous Party Collective African Acid Is The Future 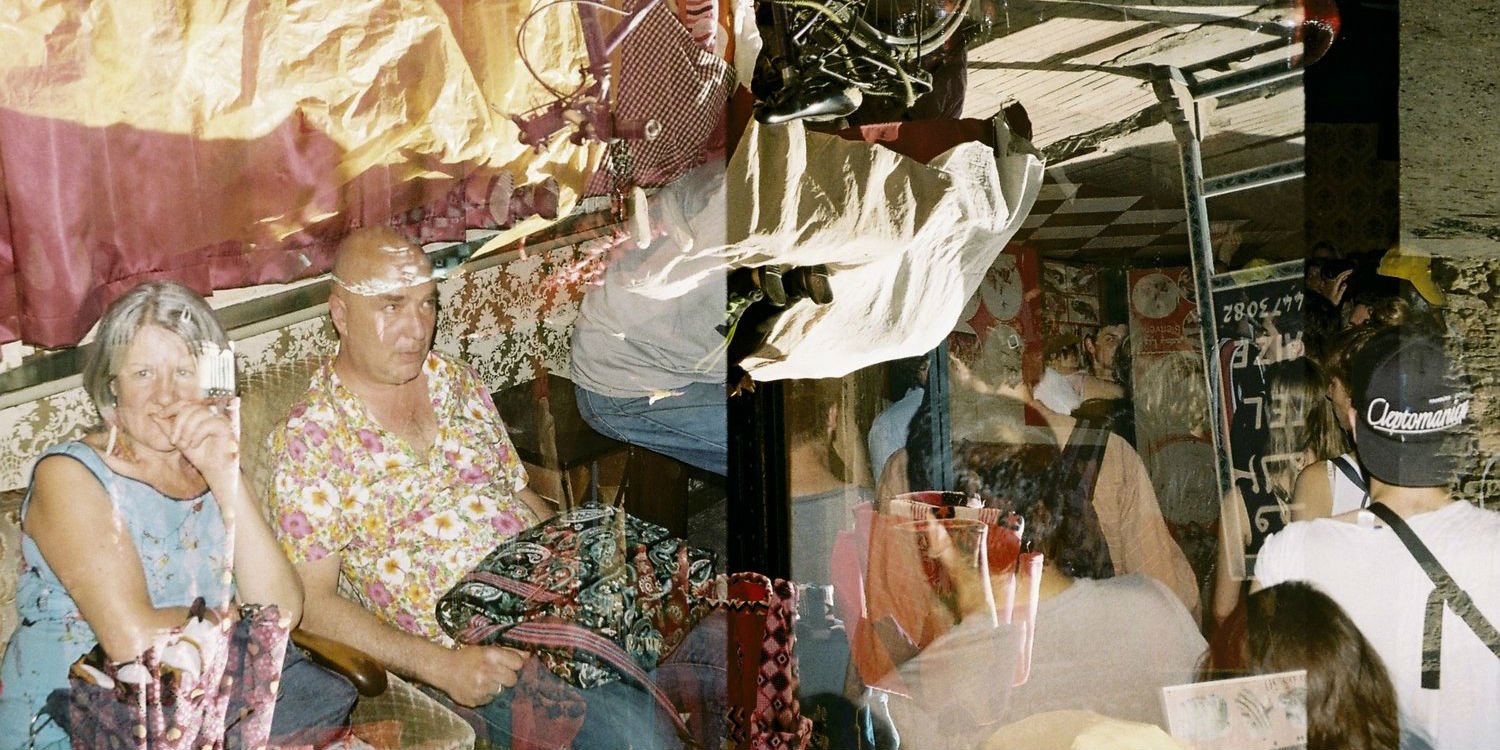 Dressed from top to bottom in all-black attire, wearing a mute expression and carrying a cloud of anxiety and anticipation, my friend and I stood in a 300-metre long queue on the dirt road outside a warehouse that houses what is arguably the world's most famous club – Berghain. Having just landed in Berlin the same day from India, we stood shivering amongst about 400 people clad in black, a crowd mostly comprised of trademark Berliners with a sprinkle of curious tourists like ourselves. Three hours later, in spite of following every so-called conspicuous rule on the Internet, once we reached the forbidden entrance, a German bouncer inevitably glanced at us, muttered 'no' and signalled towards the exit. Expressing almost no reaction – we had already considered the high probability of this situation – we strolled away, making eye contact with hundreds of pitiful, understanding glances.

We came all the way to the techno capital of the world on a pilgrimage, and had been turned away from Mecca. What we felt was equal parts devastation and nonchalance, with a pinch of anxiety – did we do something wrong? Were we not edgy enough? Perhaps we checked our phones in the queue, or laughed too hard; maybe our wide-eyed fascination gave away our strangeness and newness to the city. Perhaps our anxiety revealed itself in our strict adherence to the rules, or perhaps the bouncer just didn't feel like it. Part of Berghain's fame is arguably due to this ambiguous door policy, which turns the simple process of entering a club into a high-stakes gamble and a worldwide challenge – and the same applies to most famous clubs in Berlin. Scour the Internet and you'll find hundreds of articles about Berlin's nightclubs and their astoundingly strict door policy. This appears to be a running theme throughout most clubs in Berlin, along with another – the city's obsession with techno.

It's easy to see why Berlin, a city that's faced heavy blows from the world wars and borne the divisive brunt of the Berlin wall, would find respite in techno. Post the fall of the wall, the city’s youth took over many abandoned buildings, bunkers, warehouses and so on, turning them into temporary clubs to celebrate reunification and establish a flourishing underground scene. And there is something about the industrial, unbridled energy of the repetitive 4/4 rhythms and tonality that makes it easy to just lose your mind and give in to its harnessed energy.

So in a city dominated inexhaustibly by techno and 4/4 club music, where could one experience the exhilarating freedom of Berlin party culture and its diversity, without the stringent door policies and the singular adherence to techno?

In 2014, in a post-punk bar called Herz, Maryama started to play as Maryisonacid with just one intention – to be able to play absolutely everything she wanted, without feeling the pressure of what people called “the scene”. Playing sounds that varied from African rhythms to techno, post-punk, jazz, new wave, dub and so on, it was on a little dancefloor with a crowd of about 50 people when Maryisonacid gave birth to the infamous Berlin party series 'African Acid is the Future'.

Dauwd, Maryam and Romain (from left to right) at the first edition of African Acid is the Future.

If you search online for African Acid is the Future, you'll usually come up with the same result, an intriguing description of the party that reads:

“From afro to techno, and a lot more in between. Because Africa is mother of beat, and beat is tempo. May your hearts beat on our tempo and steps groove with our flow. On an acid trip around Afro rhythms, travelling from Nigeria, Ethiopia, Congo to Ghana, cruising on electronic sounds, cosmic rhythmics and psychedelic vibrations. African acid is the future and ...^*^”

It was for the very first event that Maryama penned down this summary of AAITF, little knowing that this now-famous, oft-quoted description would come to be the identity of the party. “The very first party was really odd as I was running a bit late to arrive at the bar,” Maryama told Wild City over email. “When I finally got there, there was a Japanese lady by herself waiting for me on the tiny dancefloor. She found the event on Facebook almost by accident. She told me she liked the name but most of all the description that is now a kind of mantra to us.”

Just that little incident and the fact that someone was intrigued enough to take a chance on her and the event based just on the description, gave Maryama the satisfaction and the confidence to continue what she was doing, and make it a regular affair. She continued to play on her own for the next few editions, often playing for 12 hours straight from 10-pm to 10-am, until she decided to ask Romain Azzaro, aka Wolfonacid, to join her.

Over time, the party organically evolved and as the crowds kept growing, they moved the party from Herz – which is now a chicken fast food joint – to Loftus Hall, which combined the intimacy of Herz with more space and a proper sound system. With the noble intention of shaking up Berlin's underground music scene and bringing diversity – both sonic and otherwise – to the city's club scene, AAITF's psychedelic, flamboyant parties are now, as someone described it, “the most exciting thing to have happened in Berlin since the wall came down”.

In a city like Berlin that, despite its dominant penchant for techno and proclivity towards Berliners, is so embracing of alternative culture, AAITF, with its enigmatic, eccentric description and its expansive attitude, was bound to be a success.

“I think AAITF just brought diversity to a larger audience in Berlin nightlife but without patronising,” said Maryama. “Many people contributed to the diversity of the Berlin music scene before us and worked very hard on showing a variety of skilled people from around the globe, and without those, we wouldn't be here today. We have a very healthy growth mostly because since the beginning, we've really taken care of keeping this project the most relevant to our ideas and values.”

The story of AAITF and its ethos speak for itself – it's all about mixing genres and open perspectives on how to put on a night, which is visible in the collective's candid approach to their programming, which will see seemingly contrasting acts like Geum and DJ Sotofett, or Nick Williams and The Dodo Women's Group in the same night.

“The idea has always been to invite artists we really care for with mild compromises on what works at the party. The booking is such a thrill but also a huge challenge for us as we love to combine acts very freely,” said Maryama. “We'll play techno alongside jazz, rumba, Haitian voodoo, post punk, new wave, dub and so on... there are no boundaries, which is why it brings so many people together.”

The remarkable part is that AAITF – which has now travelled across the continent and, starting today at Mumbai's Far Out Left festival, to Asia – has never relied on any promotion apart from a closed group on Facebook to spread words of the parties, or word of mouth. In spite of that, the club night has seen situations where they've had two-hour queues and people calling them from across the world to ask if they can attend. But then, it's also no surprise – with the rich, diverse atmosphere at AAITF parties, which are known for their flamboyant, decadent decor, their carefree ambience and the exhilaratingly free programming and rhythms, this was bound to happen.

But that doesn't mean the parties aren't intimate either. When asked what a typical night with African Acid is the Future is like, Maryama compares it to a house party. The parties start smoothly, gradually building up without throwing in “banging dancefloor tunes” as she puts it. There's a mix of residents, guest DJs or even live acts at most parties, which don't wrap until 10 am on a “very after hours in a living room sort of atmosphere”.

In an interview with Strange Sounds From Beyond, Romain, Maryama and Dauwd – who joined the collective a year after its conception – gave vivid descriptions of moments from AAITF parties, which paint an experience that sounds unusually warm and intimate yet ecstatic and almost ethereal at the same time. Romain described a party where a potential catastrophe following a power cut was avoided by their friend running behind the booth to play his trumpet, while Dauwd told the story of how a casual barbecue for band members before a party turned into an inclusive party with their guests. Maryama, meanwhile, described AAITF nights as being “mixed, eclectic and schizophrenic” and referred to analog pictures of the parties clicked by Camille Bokhobza (used throughout this article) as accurate representatives of the beauty of AAITF.

“We play music, the music we love, (which is) a very broad selection with as little ego as possible. We are free from the unpleasant task to fit in, and people feel that,” said Maryama. “Success is relative and we're happy when the party is busy, but the real success is to keep on going . Our vision for AAITF is to be part of its generation and to continue to always be as free in its programming. There is a space for a lot of new projects to happen.”

And AAITF does have new projects coming up. Just a month ago, they announced the launch of their label African Acid is the Future, and the release of their first record AMBIANCE I in partnership with The Vinyl Factory. The double LP, which is the first in a three part series, is “a testimony of our musical journey” with two live performances featuring Kenyan dodo singer Ogoya Mengo & The Dodo Women, and “Zimbabwe's mbira queen” Stella Chiweshe, backed by remixes from Wolfonacid and Dauwd, which Maryama calls “the soundtrack of the vibe of our party series”. The trio are also developing the label and launching a fanzine with the collective, which will also be named 'Ambiance'.

When we asked Mariam what someone who's never attended one of African Acid is the Future's parties should expect, she promptly answered: “No expectations, only surprises”.