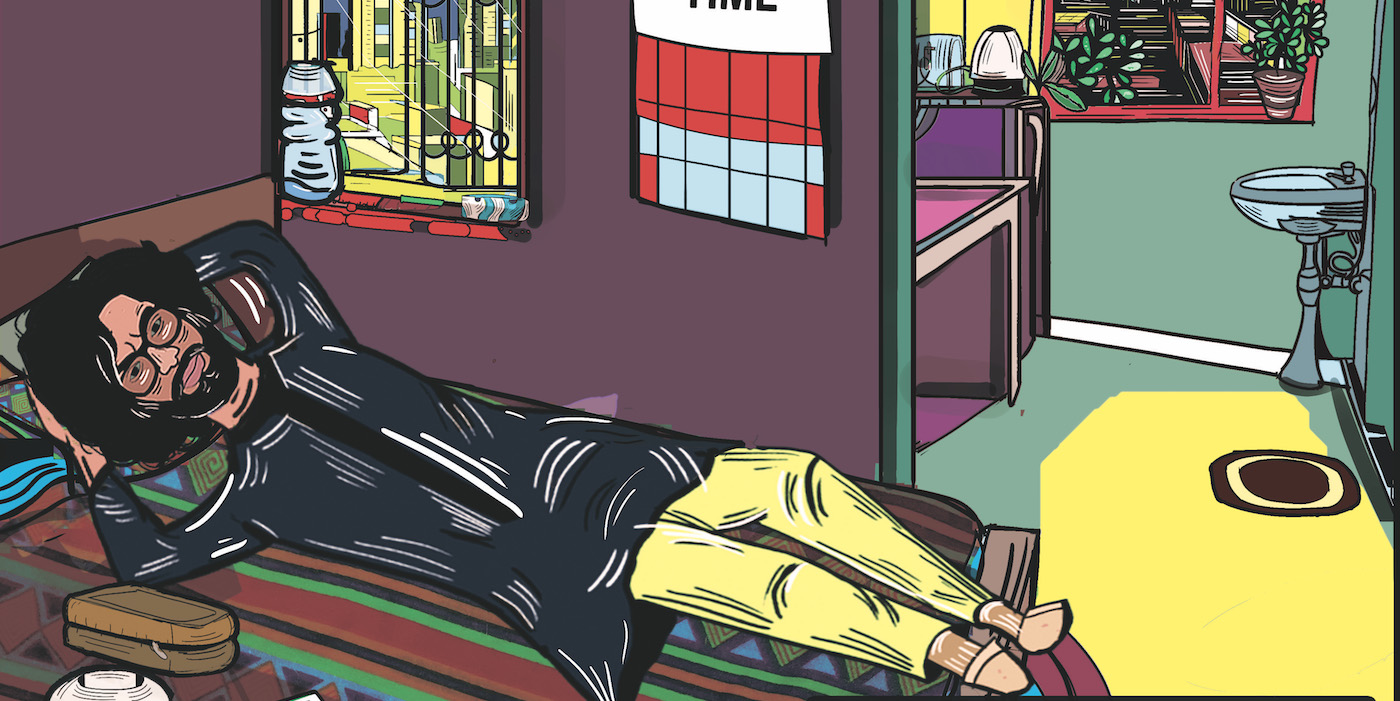 Ronojoy Sircar is a curator of art galleries and poetry compilations. He is a film-maker, a photographer and a writer. He was an assistant professor of English in University of Delhi.

When a multi-faceted individual like that distils his life and experiences into music, the result can be anything but ordinary and simple, even if delivered through the ordinary and simple instrumentation of voice and an acoustic guitar – as he does on his debut EP ‘Waiting Time’, which premieres with Wild City today.

With a keen awareness of the medium he explores, Sircar creates a sonic memoir with the full realisation that he can express himself and the world around him through more than his lyrics. The New Delhi-born talent’s individual footprint as a dweller and dealer of contemporary art can be noticed all over the 3-track release which he presents almost as a piece of concept art, bringing to life his performative character R#onbus. Birthing R#onbus back in 2017 as a way to deal with his depression, Sircar now uses the character to sing out and echo the places and changes that shaped his identity between November 2018 and August 2019, when he moved from New Delhi to Mumbai. Both the cities find their place on the EP through their sounds that they leave in our subconscious: rainfall, public transportation announcements, and the density and pace of its crowd.

While most acoustic singer-songwriter works keep their lyrical prowess as the focus, Sircar lets each element have its limelight in an EP that’s as much instrumental as lyrical. The city noises find their breathing space between the curious and captivating energy of the guitar playing on ‘going’, before handing over the focus to lyrical singing and spoken words on ‘creases’, and ultimately letting the closing title track offer a rich lilting dialogue between Sircar’s vocal melodies and guitar hooks. Even with a limited sonic palette, ‘Waiting Time’ inhabits a progressive nature in its seamlessly but radically shifting structures and the pageantry of performative elements.

Attempting to “to record, document, and archive how one inhabits spaces, and how spaces eventually inhabit us”, Sircar knows not to hinder the spaces and time around him from bleeding on to the record. The EP almost has a live improvisatory feel to it, leaving in each slip of finger and allowing passion to guide its pace and intensity for a result that’s more intimate and alive than its polished counterparts.

Listen to the EP below and head to R#onbus’ Facebook for more information. Head here to listen and purchase the EP via Skillbox

As part of the release, Ronojoy Sircar is raising funds for Tender Heart NGO, which educates and supports differently abled children and children from impoverished villages around Bhatola. The EP is priced at INR 250, equivalent to the price of a child’s uniform. The listener can pay the set price or anything above it, all of which will be donated to the NGO and the donor would receive high-quality version of the EP, the original artwork and an unpublished essay by Sircar. Head here to support the fundraising campaign on Skillbox.

B:ENT is also hosting a virtual listening session, in collaboration with Skillbox, for the EP on June 21, which will feature the playback of the work and insights from Sircar, co-producer Dhruv Kathuria and art designer SAAZ. Head here for more details.