Exclusive First Listen: 'Thoughts To Melt To' By Disco Puppet 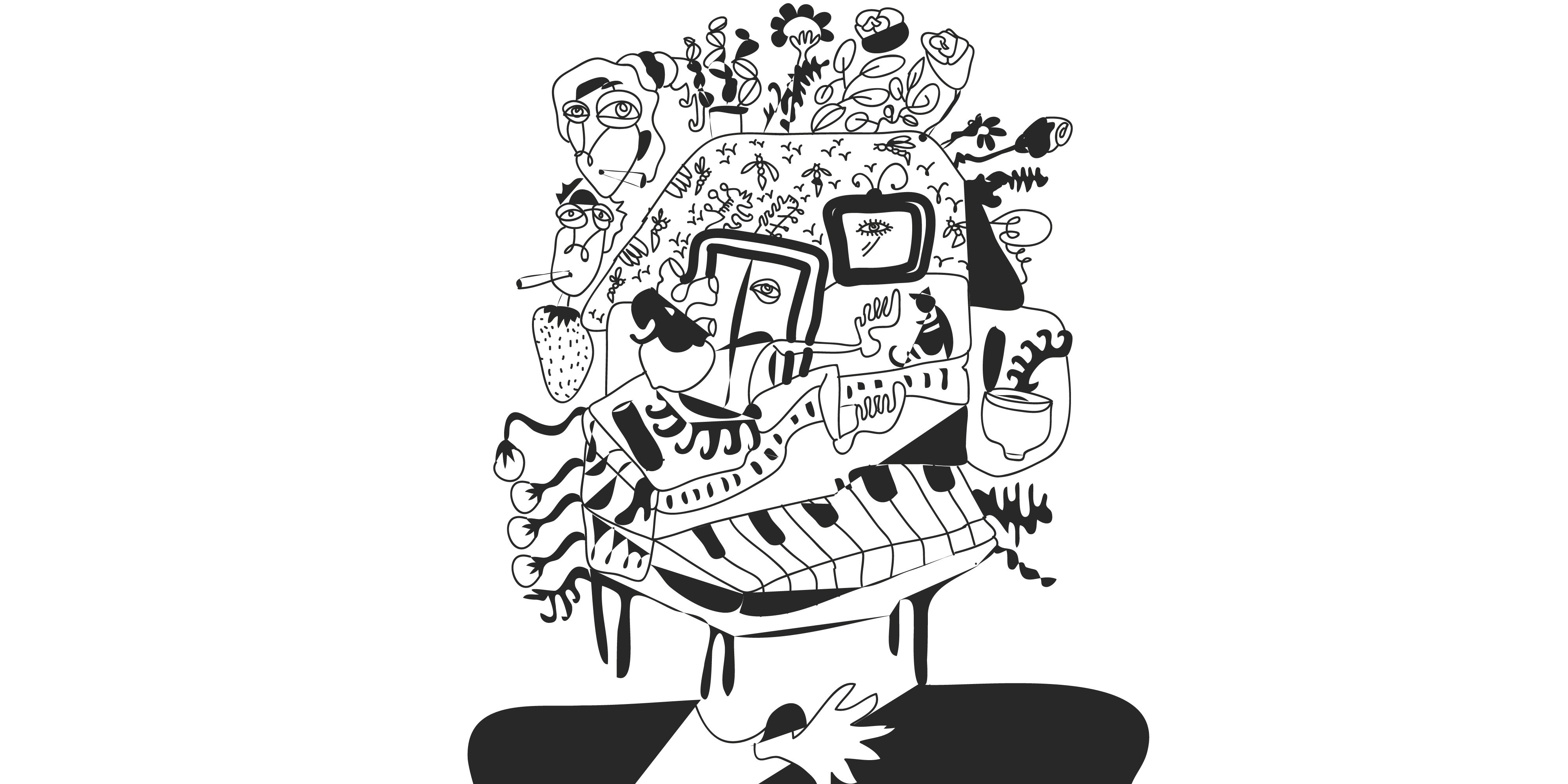 More than once, I have wondered what it must feel like to live inside the mind of Shoumik Biswas. I imagine it's all sorts of crazy and wonderful and tumultuous, with overwhelming stories and ideas and little tunes and whimsical imaginary creatures ricocheting off the sides (and perhaps a fluffy, fat cat just sitting in the corner and yawning while observing the carnival). Looking at the artwork for the endearing new Disco Puppet EP 'Thoughts To Melt To', and listening to the music, I suspect my assumption may have been somewhat accurate.

Biswas wrote the EP to try and fetch answers to questions he had about music and its presentation, and whether a piece of music or a song required complex production to hold up or be good. Revisiting Daniel Johnston's 1983 album 'Hi How Are You?' made him appreciate the simplicity of the recordings and their nostalgic, melancholic charm. And in the process of seeking answers – keep in mind, this all happened during the COVID-19 lockdown – he rediscovered cultural artefacts from his past, and ended up recording his own raw, stripped-down EP, live in his home studio.

Calling the release offbeat doesn't quite cut it; calling it quirky or cute seems like a criminal understatement; it can only be described as a whimsical parade of dark creatures from the bedtime tales of our childhood, disguised as enchanted wood creatures. There's a mischievous energy on the record, born from the juxtaposition of all that is cheerful, delightful, and the melancholic burden and irony of being, which makes it wistful and strange, yet unexpectedly wholesome. Because what is more human or relatable than to exist simultaneously in a state of utter joy and utter despair.

The mood is set right from the melodic, playful 'Peace Lily Parody', reminiscent of Mort Garson's 'Plantasia' and sounds what one would imagine an enchanted forest sounds like, or dancing plants. The childlike, toy sounds on 'Nosty Boy' (borrowed from the iconic theme for the animated series Rugrats) recreate the innocence and naivete of a shy child finding solace from bullies by crafting his own imaginary world, while 'Temporary Paradise', in contrast, channels the despairing energy of King Krule, echoing the stillness and desolation of being trapped in a lockdown.

While it's hard to find fault with any of the tracks on the EP, the most compelling moments on the record appear on 'Don't be sad. The Boogie's Man back!' and 'Romeo and Juliet'. Perhaps one of the most clichéd and overrated couples in literary history, Disco Puppet re-contextualises the tragic tale of Romeo and Juliet for the quarantine, telling a tale, instead, of two lovers pining for each other and waiting to meet during this period of isolation. The vacant, doleful vocals of the lonely, pessimistic lover, coupled with the arresting riff and optimistic melody, offer momentary distraction from isolation and uncertainty about the future, only to ultimately dive deep-end into a pool of fear and uncertainty that culminates with cheerfully disguised tragedy.

If I didn't know better, I'd think perhaps Disco Puppet was using the ballad as a metaphor for the eerie thoughts, anxiety and depression that has overcome several of us during this lockdown, but choosing to paint it, instead in deceptively pastel hues of hope and optimism. He did say the artwork represents a person trapped inside their own imagination, their anxiety and panic externalised by “the beauty of finding the rhythm in everyday life”. Perhaps, we can find answers on the theatrical 'Don't be sad. The Boogie's Man back!', which, on the surface, depicts a dramatic dialogue between a father and the boogie man, but what I suspect is really an internal dialogue running through the mind of a person grappling with their mental health during this period. “I am falling into a pit of despair / won't you lend a hand, I know you can,” the father implores the boogie man, who reassures him: “Look alive Mr Man, I am back, I am here to help you / We will terrify this guy, what did I say? Boo!"

After witnessing Biswas' theatrical shows for 'Aranyer Dinratri' I thought there was little Disco Puppet could do that would surprise me more – I was clearly wrong. There's no doubt in my mind, after listening to the EP, that Disco Puppet's mind really is a carnival of sorts, of imaginary creatures and whimsical ideas, and he brings them all to life here, washing them over with absurd appeal, enchanting moments, simple, off-beat melodies and nostalgia to offer 'Thoughts To Melt To'.

Disco Puppet officially releases the EP on Sunday (May 3). However, until then, you can stream the EP exclusively via Wild City by following the link below:

Disco Puppet will be contributing 100-percent of the proceeds from sale of this record (till May 26) to Goonj, a non-profit that is aiding those who lack essentials with means to survive this time of crisis. All those who purchase the EP from Bandcamp will also receive a bonus track as well as a digital booklet containing lyrics and illustrations.