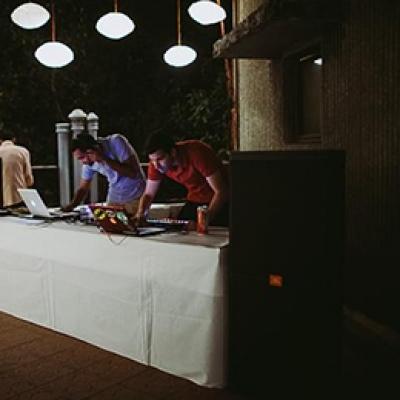 New Delhi based production and DJ duo Ase (Anant Ahuja) and dubSekhri (Neal Sekhri) are the Indian flag bearers, producing original cuts as well as a staggering array of bootlegs and remixes. The tag-team are also resident DJs at the House of bhane. and are known for spinning a selection of space age, future music infused with classic hip-hop, reggae and dub.

Also involved in the development of bhane’s online music portal - bhane.FM, they curate mixes and playlists from DJs, producers, and music lovers around the world to give listeners a place to find fresh artists and soundtracks at any time of the day, at the click of a button.

This weekend (2-4 May), MadStarBase will be performing at bhane.live - a 3 day pop-up music festival - officially launching bhane.WIP, the flagship bhane. store as well as bhane.FM. They'll be playing alongside a host of some of the nation's freshest and most exciting musicians. Some of these include Curtain Blue, Frame/Frame, Nanok, Your Chin, When Pandas Attack and more.

Taking us past our diamond anniversary, mix #076 comes full of surprises. Opening with an original bootleg, it blasts through tracks from the likes of Rain Dog, Hayden James, Darkside, Flume and Branko whilst still dipping into original bootlegs and production from this dynamic duo.

"This set was mixed by Ase and dubSekhri. It begins with a newly released MadStarBase remix and features some of our other work along with tracks we jam to and take inspiration from. At about 30 minutes we get into 113 BPM, taking the set into a zone of groovy and funky house tracks which will definitely get you in the party mood." - MadStarBase