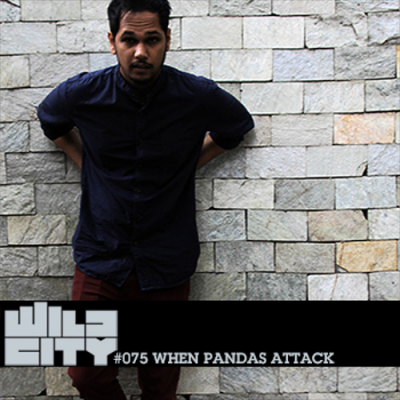 What the fascination is with putting the word Panda in you band or DJ name, I can't exactly comment on. What I have observed however, is that it seems to be prevalent in acts truly pushing boundaries within their respective genre.

The newest and youngest member of the 'Panda' society is When Pandas Attack - Delhi based musician and graphic designer Ankur Chauhan - someone who's recently popped up, quite literally out of nowhere and created official remixes for the likes of Sandunes and Monsoonsiren as well as uploaded a ton of tracks to his SoundCloud.

In general, electronic artists bringing organic warmth to their recordings are few and far between - yet Pandas does this in a raw and clear cut manner - one of a handful of artists capable of crafting a widescreen and organic-sounding world - full of dynamic space.

In line of that thought his mix comprises of a relatively down-tempo disposition: easy listening for those who’ve reached the dazed dawn after a wild night out, or for those making the best use of aural interlude. Its incremental progression is an insight into exactly what makes this kid tick - notable but, in the grand scheme, not revelatory. Maybe still, a touch mysterious - just the way we like it.