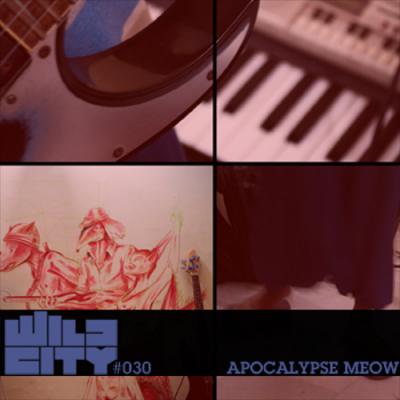 At first Apocalypse Meow may come across as just another guitar-based band. In fact, they're pretty much the opposite. Combining echoing atmospheric accompaniments with electronic beats their sound is something quite unique and continues to evolve throughout their production.

It's clear throughout their Wild City mix that the 3 piece act discard conventional verse-chorus-verse songwriting and replace it with complete technicality, piecing together segments of alternating genres and musical blends. The result proves easy listening even though at times like a showcase of the bands technical ability. That said, their technical ability and individuality as a band are undoubted and their sound offers more than mere gentle suggestions of potential. Rather, ounces of it.

Exactly where these guys came from and how they've managed to remain a minor concern baffles me. On record, they're little short of perfect and frankly piss all over a local scene (alongside a few others) that's smug with itself for having produced mediocre bands for over a decade.

"AM is an experiment. There is no sound worth hiding from, for all sounds are mere vibrations; the rustling of leaves, the roar of a tiger, the sound of rain and thunder, the crash of a meteor, the movement of ocean waves... the purr of a sleeping kitten. Here lie the seeds of endless experimentation. Conformity and genre are child's play, but left to the all-encompassing universe of a wave of sound, there is only possibility to be found. The only thing left to do in these uncharted lands is to follow your ear." - Apocalypse Meow

To give you a good understanding of where these guys are at, Wild City #030 comes as a 3 track mix of purely original and never-before-heard music. Produced and put together exclusively for our readers it proves that Delhi's electronica scene is on the cusp of exploding and that in 2012, AM is one of a handful of bands that need keeping an eye on.

You can hear and download their outstanding mix below. Music lovers in Delhi can catch the band play their debut show at TLR on Wednesday 27 June. More info on that show and others happening across the country can be found on our events page here