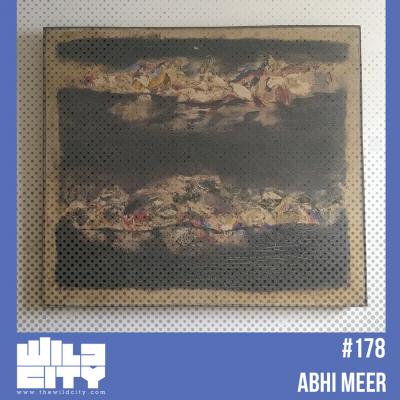 DJ, radio host and music critic Abhi Meer’s mix for Wild City might be our most dramatic one yet. Peppered generously with riveting moments, the mix is an auditory equivalent of a consolidated epic thriller.

Abhi Meer has a reputation for approaching his sets with a research-like approach. Consequently, the boxout.fm regular has had the privilege of playing at club gigs, festivals and residencies around the world, including the first Boiler Room party in New Delhi.

While some mixes aim for the dancefloor experience and others for passive listening, our latest mix demands – or rather, steals – your attention with its stirring moments. The first of such moments is employed to grip you from the get-go, as the bright mood of The Smith Connection’s R&B hit ‘Under My Wings’ slows down, in the gimmicky (and we consider it a positive thing) fashion of an interrupted vinyl playback, to make way for LORN’s colder electronic sounds in ‘Kold Mirage’.

Throwing in outlandish selections with Caterina Barbieri’s ‘Pinnacles Of You’ and the jarring piano strikes in ‘Arrows Of Time’, Abhi Meer engages the listener with off-kilter tracks that punctuate seamless blends of genres, traversing through bass, IDM, dubstep and beyond. Meanwhile, the rhythmic onslaught of Rainer Veil’s ‘Element’ catching us off guard as we give in to the calming harmonies of Lifted’s ‘Near Future’, goes down as our favourite moment; it’s the perfect example of the undulating respite and thrill in Abhi Meer’s narrative. If such a selection was to be mixed live, we imagine the best way to take it all in wouldn’t be through the dancefloor but by having the listeners seated down – as if watching a theatrical performance unfold, or a work of meticulous musical storytelling.

“I wanted this mix to be a relic, and so my approach going in was basically to create a parable rather than a DJ mix. In the two months I've taken to put this together, I've been listening to a lot of jazz whilst obsessively reading about the Pythia, the Oracle of Delphi. I've also suckered myself into studying both dub music studio techniques and tape manipulation. All of the above, and the fact that I've been in recluse mode, have contributed to this recording. In short, essential listening while your cat pets you.” - Abhi Meer

Listen to the mix below or check it out on Mixcloud here.