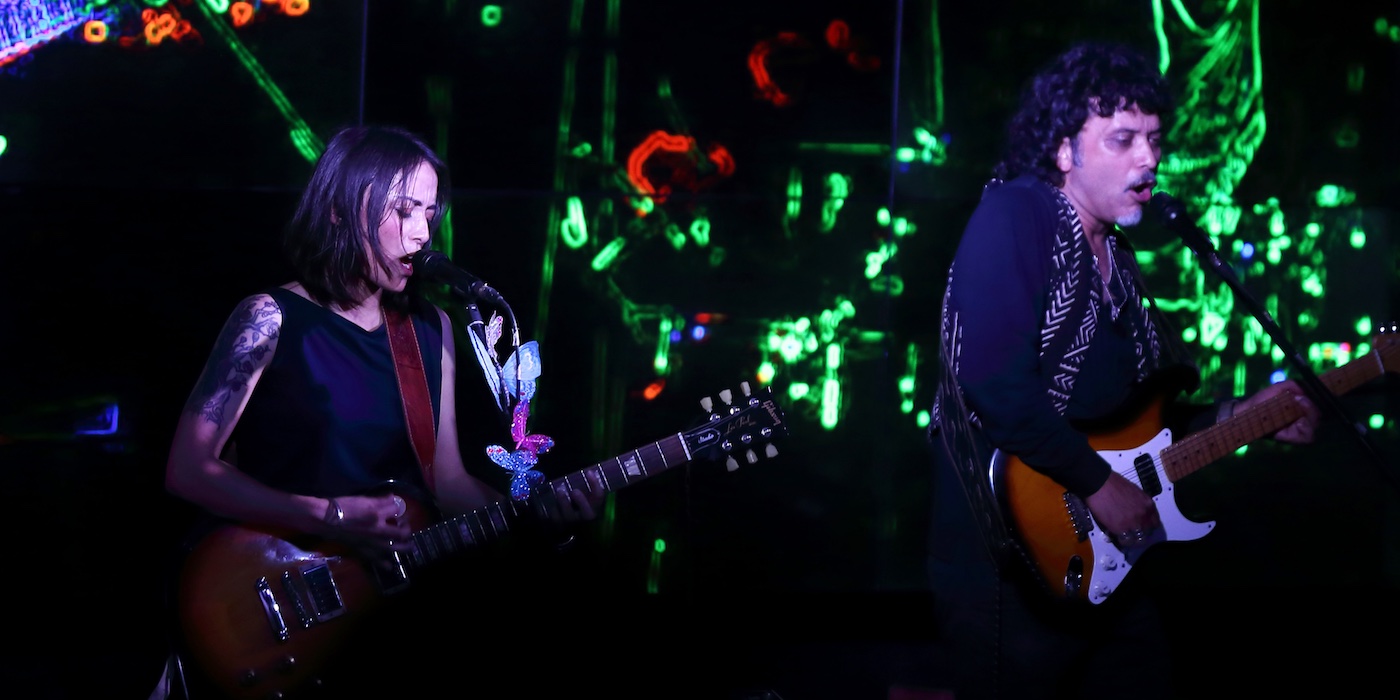 When an Indian band has been playing the blues for nearly two decades, does it become a native form? That is the question that Soulmate, the blues band from Shillong, continues to throw up with the release of their fourth album ‘Give Love’.

Formed in 2003 by guitarist Rudy Wallang and vocalist-guitarist Tipriti Kharbangar, Soulmate is the most well known original blues band in the country. Though Wallang doesn’t think the blues has become native to India yet, he is “happy to have helped spread the word through our gigs and four albums.”

Their charm lies in the honest and unapologetic way they play the blues and not any derivatives. Following in the tradition of Chicago and Texas styles, they are purists in the electric format. The grungy, raw notes bleeding out of Wallang’s guitar, the disarmingly free spirit of Kharbangar’s vocals and their syncopated interplay represent a captivating force. “It’s the chemistry that Rudy and I share when we make music. Since playing the blues is all about feeling, we feed off each other’s emotions,” says Kharbangar.

Different musicians have been used over the years to form the backing band. Currently, the roles of bassist and drummer are performed by Wallang’s sons Leon Wallang and Vincent Tariang respectively.

Spreading The Gospel Of The Blues

While the blues traces its roots back to the folk music of western Africa, as found in the music of the late Malian musician Ali Farka Toure, the music came out of the American plantations in the early 1900s. African American slaves singing out their pain combined with field hollers and gospel hymns to form the bedrock for the blues.

As it originated in the Mississippi Delta, one of the earliest forms of blues to surface in the 1920s was known as Delta blues, characterised by the usage of a slide guitar and harmonica. The music got electrified in the ’40s when it moved to cities like Chicago, Memphis and Detroit. Within a few decades, rock music evolved out of the blues, gradually spreading across the world.

In India, though a vibrant rock scene existed since the late ’60s, a traditional blues music scene only emerged in Pune in the late ’80s and early ’90s through the efforts of Sagar Sarkar and his band Contraband who held jam sessions at lesser-known venues and private houses.

When Soulmate arrived on the scene at the turn of the century, the blues was played only in elite bars in a few cities. Their popularity grew hand-in-hand with the fortunes of a pub called Haze in New Delhi where they played two gigs a month from 2004 until it shut down six years later. “The best part of the residency at Haze was that there were musicians who wanted to jam with us every time Soulmate was in town. Some of them went on to form their own blues bands,” says Wallang.

Incidentally, Kiran Sant, the owner of Haze, hosted the yearly Blues Festival there from 2007 much before the Mahindra Blues Festival was started in 2011. Lou Majaw (Shillong), Saturday Night Blues Band (Kolkata) and The Beet Root Blues Band (Mumbai) were among the several artists who performed there.

The journey of the blues from pubs to arenas in India happened on the shoulders of Soulmate too. “That transition was possible thanks to Amit Saigal (the late founder of music magazine Rock Street Journal). We performed at many editions of The Pub Rock Fest and The Great Indian Rock Festival organized by RSJ. These gigs took us to audiences in cities and towns we would never have dreamed of playing ever,” says Wallang.

Besides that, Soulmate has opened for Carlos Santana at Formula One Rocks in 2012, played at almost all editions of the NH7 Weekender and performed on numerous occasions at the Mahindra Blues Festival. This brought the blues out of niche pubs to a much wider audience, creating more space for it within the Indian music industry, at a macro level.

Soulmate also took Indian blues to an international stage by being the sole Indian representative at the prestigious International Blues Challenge held in Memphis, USA, in 2007 and 2010. The fact that they have held their own against blues stalwarts such as Buddy Guy, Derek Trucks, Jimmy Vaughn and Taj Mahal stands as a testament to how inherently they have imbibed the music.

Bringing The Blues Closer To Home

Soulmate’s first two albums ‘Shillong’ (2005) and ‘Moving On’ (2009) stuck to the usual lyrical tradition of longing and its downside. While the former was on the happier side of the spectrum, the latter dealt more with anguish, reaching an agonizing peak on the track ‘Set Me Free’.

From roaring shuffles to melancholic ballads, the albums cover a wide gamut of electric blues standards. Two acoustic songs ‘St. Valentine’s Day Blues’ and ‘Remembering Rory’ even follow in the tradition of older blues with the usage of a slide guitar.

With ‘Ten Stories Up’ (2014), however, Soulmate struck musical gold. They achieved a distinct sound and the vocal-guitar interplay became a refined signature. While they had experimented with Khasi vocals on the title track of the first album, here it became a natural part of a blues song by replacing the English vocals on the track ‘I’m a Woman’, thereby making the genre feel closer to home.

The pair explored this tangent further with Soulmate and the Clansmen by teaming up with traditional musicians to fuse the blues with Khasi folk music.

Rooted In Politics And Pain

Lyrically, the earliest blues songs dealt with suffering, farming, death, poverty, natural calamities, mistreatment by the police, violence and oppression at the hands of white people and gospel themes. There was also a heavy presence of passion, love, sex or the pain that comes from not getting these. This was how the original bluesmen forgot their woes.

The spread of the blues along with soul, jazz, rhythm and blues and rock music, brought black culture to the forefront as the songs spoke about the lives and experiences of the African American community at large. This played an important part in the Civil Rights Movement in the USA during the late ’60s. The movement’s prominent figure Martin Luther King Jr. was quoted saying, “The blues tell the story of life's difficulties.”

Today, in the wake of the Black Lives Matter movement, the spirit of the blues is very significant as it continues to address the sorrows of a community that is still subjugated to racial biases and violence even a century later.

Soulmate also struck a political chord on ‘Give Love’ with tracks like ‘Hole in Your Soul’ and ‘Troubled Times’. The former is an outcry against the corrupt and avaricious practice of rat-hole mining, prevalent in the band’s native state Meghalaya, due to which numerous labourers have lost lives while the latter reflects on how dangerous the world has become with rampant hate-mongering, assaults on women, corruptness of politicians and the facade of sold-out media.

When asked about the political turn, Wallang says, “It has become so blatant and in your face now. As far as I know, here in Meghalaya, we have business people at the helm of affairs, no leaders. All of them are using government machinery to promote their own interests. How long can one keep quiet... we need a revolution!”

Meanwhile, Kharbangar has easily earned her place as an influential figure in another struggle: feminism and equalising gender representation within India’s music scene. She was one of the few female performers who fronted bands when Soulmate started out. “It was very powerful and inspiring to see a woman command a stage like that. Tipriti is literally the boss!” says Mumbai-based musician Aditi Ramesh, who first saw Soulmate perform a decade ago. “There is more space for female musicians in the industry now because women like her have been doing it for so long.”

Today, India has numerous blues bands, a yearly festival and a niche fan following despite popular mood being captured by hip-hop and electronic music, and safe to say, Soulmate has a big hand in making this possible. Meghalaya itself has a burgeoning blues scene with bands such as Blue Temptation and Quiet Storm making waves.

“When you think of blues in India, Soulmate is the name you think about. It’s easier for us to have an audience because they have already created an audience for the blues in the country,” says Kolkata-based guitarist Arinjoy Sarkar, who jammed with Soulmate as part of The Homegrown Blues Collective at Mahindra this year.

Soulmate took the blues out of obscurity in elite pubs to a national platform and gave it a fighting chance against other genres in the country’s indie scene. By performing original compositions, they made the blues their own, or rather, the blues made them its own.

Listen to Soulmate's latest album 'Give Love' below and head to their artist profile here.