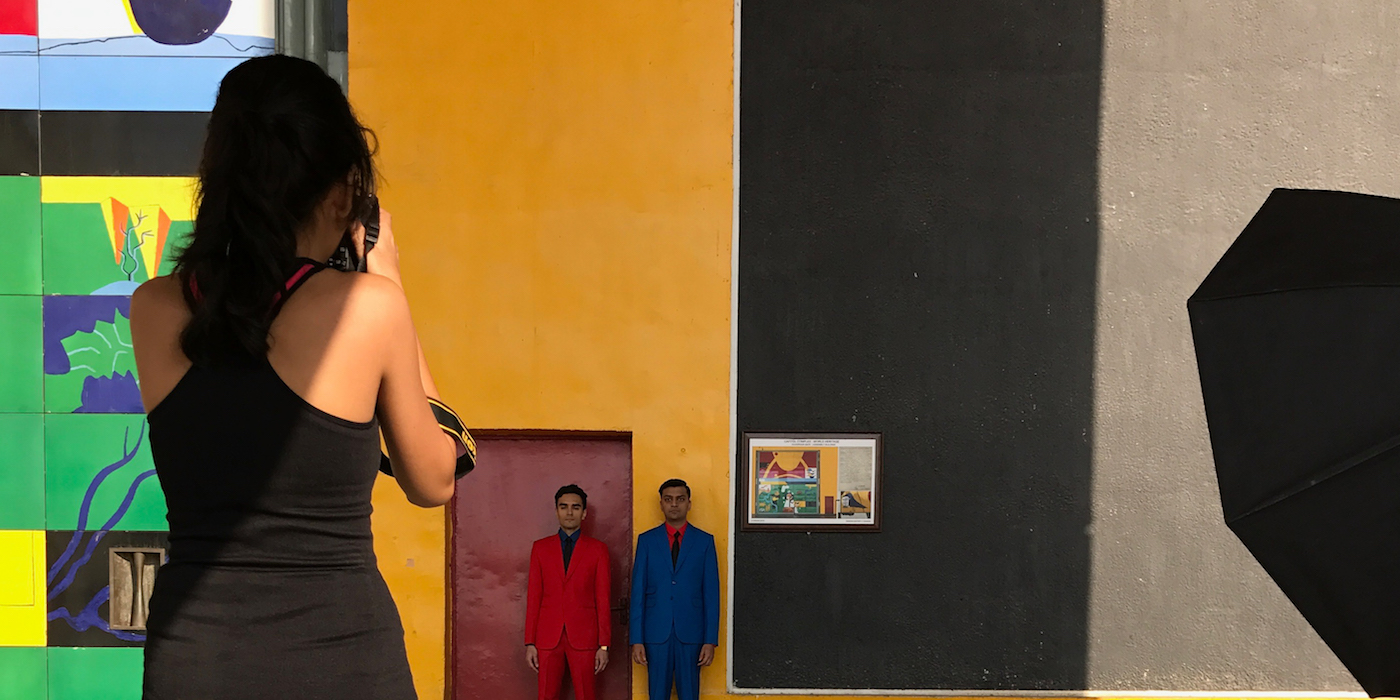 Dedicating the month of March to the immensely talented women in our music community and to spreading awareness about female representation and inclusivity in the music industry, through a series of mixes, features and conversations, we spoke to photographer and visual artist Parizad D to dive into the experiences that shaped her meteoric career.

Writing about music on a regular basis, it felt like every standout photo-based album cover that drew me into its layers of meaning bore the same credit: Parizad D. From Tarun Balani’s ‘Dharma’ to Kumail’s ‘Yasmin’, the plethora of details in these albums’ artworks warrant a careful few minutes of deciphering like you would in some ‘Sgt. Pepper’s’ or ‘To Pimp A Butterfly’. Even Parizad’s more minimal work for the likes of Parekh & Singh and Ankit Dayal bear a striking aesthetic, capturing the harmony and dissonance of the music in befitting measures in its shades and contrasts.

“Something that I personally enjoy doing is making work that is a little more narrative-driven and not just something that is appealing from a visual aesthetic point of view,” confesses the photographer and visual artist over the phone. “Specially for something like artwork. It’s like an album, right? It’s not just a collection of songs. There is something tying them together, there is a story behind it. I feel like visually it’s very important that what you shoot captures that.”

In her quest to achieve this, Parizad has trawled the markets of Goa with her team to source the rotting buffet that features on Balani’s cover for ‘Dharma’, to aptly capture the juxtaposition of celebration and renewal against decay and deterioration, which forms the central theme of the album. For the cover of Kumail’s ‘Yasmin’, Parizad found herself scouring the dimly-lit alleys of Bandra to find the spot that captures the late-night lonesomeness and the mess that inspired the album.

However, the beginnings of her career reflect none of that pomp and intricacy, originating with the straightforward story of a literature undergraduate saving up to expand on her casual interest in photography with the purchase of a professional camera. “I had the kind of experience that pretty much everyone who studies anything art-related in this country does,” tells Parizad. By the last year of her studies, the Mumbai-born, raised and based talent had started doing small shoots, exploring the city with her new lens and showing up at blueFROG at 7 o’clock and shooting whoever was playing. Then when the moment came to make a career choice, Parizad chose photography. “It kind of happened to me more than me seeking it out. I was just looking for an excuse to leave my house,” she laughs over the phone.

Fast forward through studying photography at Ooty’s Light and Life Academy and assisting fashion photographer Aneev Rao, Parizad witnessed a steady progression in her career which now involves activities like lugging a 50 lakhs-worth robot across the landmarks of Mumbai for Netflix’s campaign around the series ‘Lost In Space’, accompanying pastel-suited Nischay Parekh and Jivraj Singh to architecturally marvellous restricted government buildings for comically bizarre photo shoots, and getting shoo-ed away by the local aunties of Bandra’s back alleys while shooting for Kumail. “We literally got chased away by this aunty who came running out of her house screaming at us. Meanwhile, we ended up with this other aunty who was just super sweet. We were like, ‘Can we come? Can we put things in your house? Can you turn this light on? Can you turn that light off?’, and she was just super accommodating,” Parizad recollects.

There is an unassuming quality to the Mumbai talent. She tackles each question with a hesitation in her ability to answer it before, even to her own surprise, lunging into tangents that I could listen to at length. Her own career she credits to being surrounded by incredible people, city and situations, alongside a set of skills like collaborating and experimenting. “I feel like at any given time it’s important to keep wanting to step up the game. Even something as simple as technical knowledge. I feel like a lot of photographers are very afraid of taking up projects that would require them to have to increase their technical prowess. That fear kind of holds them back,” Parizad tells me. “I totally get where they are coming from because I’ve been in that space where I have been terrified. Where I’ve been like, ‘Fuck! I have actually said yes to this but I actually have no idea how to shoot it.’ But I feel like it’s important to not let that fear get in the way. I think that being open about everything is very important.”

The thirst for experimentation has led her from medium to medium, branching off from doing traditional portraits to undertaking massive conceptual visual projects with Spud In The Box in 2015, to, more recently, venturing into live visuals for Tajdar Junaid, aswekeepsearching and Ankit Dayal. “It stems from a place of creative frustration, to be very honest. At a point of time, I felt like my medium, by itself, felt a bit restrictive. I kind of wanted to move beyond that, which led to a whole bunch of experimentation. Then those experimentations went from just me sitting in my house and doing them to people actually seeing them and saying, ‘Cool! Do you want to do it at this gig?’”

Luckily for her, the openness toward visual experimentation echoes across the industries she gets her work from. “Musicians want to spend now. They understand the importance of taking this photograph. They understand the importance of having good artwork,” she tells me, pinning the change in attitude to the change in global trends at large. “More than the industry, I feel like it is the world that has changed, to be honest. We are constantly just bombarded with information and whether you like it or not, a major chunk of that information is visual. I feel like no matter what you end up doing, a lot of it does boil down to what is a visual representation of it.”

The significance of visuals is not the only thing that’s changing. Conducting this interview around our ongoing series of mixes and features to specifically promote female visibility in the month of March, our conversation ultimately found its way to gender-related problems that afflict the arts and entertainment culture. “I feel like it’s changing. In terms of fashion photographers, I do feel like a lot more women are doing that kind of stuff than they were 5 years back. But still, in general, the gender ratio is pretty imbalanced and I honestly don’t know what the reason for that is,” says Parizad. “A part of me wishes that maybe, if I could reach out to younger women and be like, ‘What are you guys doing? Why are not enough of us out there changing this?’ But I think that’s the scene in the music industry in general. I don’t know. I feel like there is definitely a lot more to this.”

Sifting through her memory, Parizad notes that she has almost always felt safe turning up for a photoshoot or backstage when she used to shoot live gigs, albeit some microaggressions and uninformed perceptions. With deeper recollection, however, Parizad recalls being huddled out of a venue after a gig. “I had to back up my card and they were like, ‘No, no, you have to leave. We are closing the club.’ I was like, ‘Yeah, but there are like three dudes backing up their cards inside’. Later I found out that the reason that I had to leave was because there was some bizarre thing that the cops would come and if you are a woman in a club after 1 am, they just assume you are a prostitute.”

A similar thing happened on a separate occasion at antiSOCIAL Mumbai as Parizad and her crew and collaborators took down the set after a Spud In The Box show. The venue staff asked Parizad and another accompanying female to wait outside and allowed only the male members of her team to carry out the tasks inside the venue. “How is two women standing on the road in the middle of the night safer than us being inside your premises?” Parizad recalls quipping. “They literally were like, ‘It’s the law – if you are a woman you can’t be inside the premises. You can stand outside the gate’. And the best part is that they tell you these things and they’re like ‘Oh, it’s for your safety’.”

What I found even more surprising is that these recollections, which also included an instance of being stalked at a gig, didn’t immediately jump out to Parizad, and we only stumbled upon them as we meandered through her nearly decade-long career to find the cause of this perceptible gender imbalance. I found there were two reasons why she didn’t make a big deal of these recollections: a negative reason and positive one. Parizad points out the former: “The sad thing about being a woman in this country is that I have been stalked so many times while I was out in the city taking photos that it just doesn’t stand out as an experience. It’s one of those things different people deal with differently. Someone who never had that kind of experience suddenly having it for the first time at a gig would be pretty scary. But for me, I don’t know if I was just so desensitised.”

On the positive side, Parizad found that these incidents didn’t bear long-lasting significance as she carried on undeterred in her career till the daily hustle became a lot less off-putting. “I feel better today. When I first started working, as someone in their early 20s, it felt odd to walk on to a set where there are like 40 people and you are the only chick. Maybe it doesn’t affect you but it’s definitely something that you notice. In a way, subliminally, it does end up affecting you,” Parizad evaluates the subject out loud. “I honestly feel like if that’s what’s holding the women back then I really want to tell them that, ‘Don’t! Don’t let it hold you back. Fuck it!’ I also feel it has to do with where you are in your career thing. But I do feel like that more of these experiences which end up demotivating you happen when you are getting started than when you are already a little way into it.”

Acknowledging the necessity for a combined effort to improve the situation, Parizad yearns to send motivation across to other females to proactively claim their space and correct the gender imbalance in majority of creative fields, undeterred by the wrongful challenges that they may have to overcome, till a balanced visibility is the normalised experience instead of the experience of being stalked. “I can see why younger women would feel intimidated by stuff like this. But I feel, unfortunately, if something like this exists then by allowing it to be the reason why you’re not doing something, you’re letting that system win,” she expresses passionately over the phone. “Everyone has their own way of dealing with it. I am not saying someone who doesn’t want to be involved in a field like this for these reasons should just do it. But yes, the system has to change. For that, there should be more women pushing for that change. You have to normalise the fact that a woman might have to be in a pub at 2 am.”