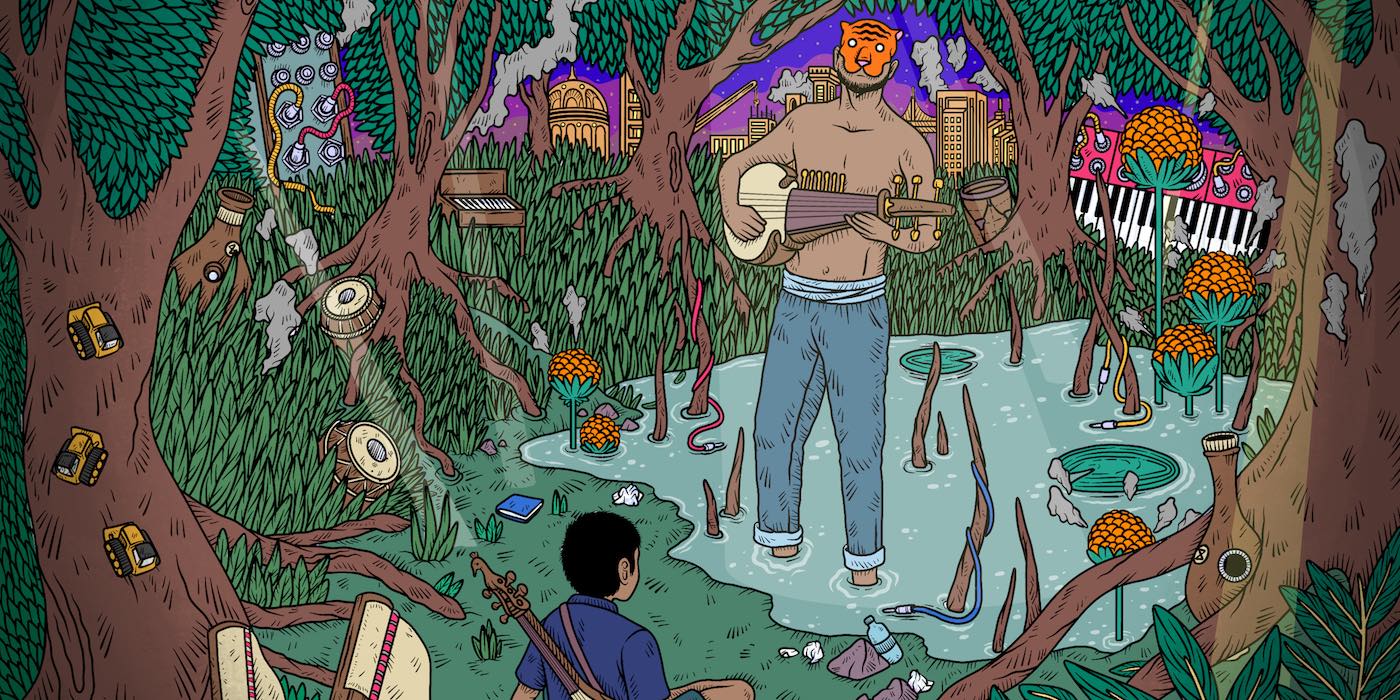 Time is a great thickener of legacies in the world of classical instruments. Maestros like Pt. Ravi Shankar and Ustad Ali Akbar Khan who are now recognised as the face of their respective traditional artforms were the ones subverting traditions, adapting music’s structures (against criticism from purists) to fit modern perspectives. Mumbai-born London-based sarod-player, composer and filmmaker Soumik Datta is one such radical who lends his own paraphernalia to the art – one that is more inclined towards glitz and vibrancy than kurtas and simplicity. His music is often a result of or a reaction to current going-ons, than a dedication to the eternal topics of spirituality or religion.

We are not saying he is in the same league as giants like Shankar and Khan, but he is certainly one of the modern-day popularisers of an Indian traditional instrument that has receded and re-emerged from near-obscurity over the last century. At the least, Datta belongs to the category of artists like Nitin Sawhney, Anoushka Shankar, Talvin Singh and Sarathy Korwar who represent the British-Asian experience in their music (all of whom are previous collaborators of Datta). To skim the surface, these are all acts that combine Indian and Western contemporary culture not as a novelty or for some marketing gimmick, but because the mix represents their upbringing, identity and them as a person. Most good music, after all, comes from a personal place – just like it did for Datta’s new EP ‘Jangal’.

Usually one to push his creative process along through collaborations, Datta found his latest 5-track release emerge from a different place altogether, a place deep within. Watching rainforests burning, school kids like Greta Thunberg take on governments to demand actions against climate change, and forest-based livelihoods and living beings getting displaced, Datta found a defiant energy take over him, which he channels on the EP. “I’ve never had the courage to make music in protest of anything before. But these melodies were raging in defiance, simmering under my skin for months on end, until I had to manifest them: songs that celebrate the jungles of our planet and the beasts that live within. A year later, here is this EP,” he mentions in his press release.

Collaboration hasn’t fully evaded Datta’s process though, but merely changed its place in it. Instead of the collaborations dictating the music, this time the music has dictated the collaborations. “By the time I reached the studio, I had already composed large sections of the music in great detail and knew exactly which musicians to invite. I wanted to feature players who also deeply cared about the environment,” Datta told Platform. Given the global nature of the climate crisis, the EP employs sounds from across the world, featuring Swedish hang drums, a rare Naga flute called bamhum, Latin percussion, ghatam, contemporary electronic timbres, and the leading hooks of Datta’s custom-built Sarod – utilising each with an educated cultural sensibility. For instance, the celebratory title track opens with the rhythm of Bombo, an ancient Latin-American drum used by Amazonian tribes to celebrate nature and rainforest, while Datta himself draws melodies from ‘Mian Ki Malhar’, the raga by Mughal Emperor Akbar’s legendary court musician Tansen which is fabled to bring torrential rains when sung by a capable singer.

Naturally, ‘Jangal’, named after the original urdu word for “jungle”, sets itself apart from Datta’s previous work through its impassioned emotionality. The music seethes with anger, lament and tranquility all at the same time, sometimes clashing its electronic and earthly timbres for a powerful tension, while other times engaging them in a mellifluous sonic dance – representing the relation between our technological and ecological worlds.

The relatively relaxed opening title track crescendos into grievous rage as it progresses before ‘Wildfire’ deepens the pain and panic till we are left with the deep bellows of ‘Beast’. The seductive melodies and vocal chants of ‘Myth’ seems to look at loss and beyond it, into the nostalgia, till the nostalgia turns to hope in ‘Plantations’. Laid out cinematically within each track and across the EP as a whole, the music is constructed with the intention of evoking very specific feelings, sketched out in its tension and release as if Datta was writing the soundtrack to a film in his head. It isn’t just the array of percussions, analog synths, Sarod, flutes, vocals, Rhodes keyboard, piano and harmonium that the composer and instrumentalist orchestrates with notable precision, he also orchestrates emotions with the same precision.

In its synthesis of Datta’s Indian and British cultural heritage, its varied sonic textures and its emotional expression, ‘Jangal’ is diverse like the nature it celebrates, which it does in protest against our inability to stop the social and ecological collapse. “As an artist, I have to believe that we have a duty to rage on, to create, against all odds, against resistance, to play and create,” says Datta. “Caged within phone frames, those burning branches in the Congo, in Peru and in India feel so distant. But these trees, like gentle giants, tall, shooting skyward are the lungs of this planet. And they deserve our protection.”

Listen to ‘Jangal’ below and head to Soumik Datta’s website for further information.