A Restless Creative For A Better World: Alok Vaid-Menon 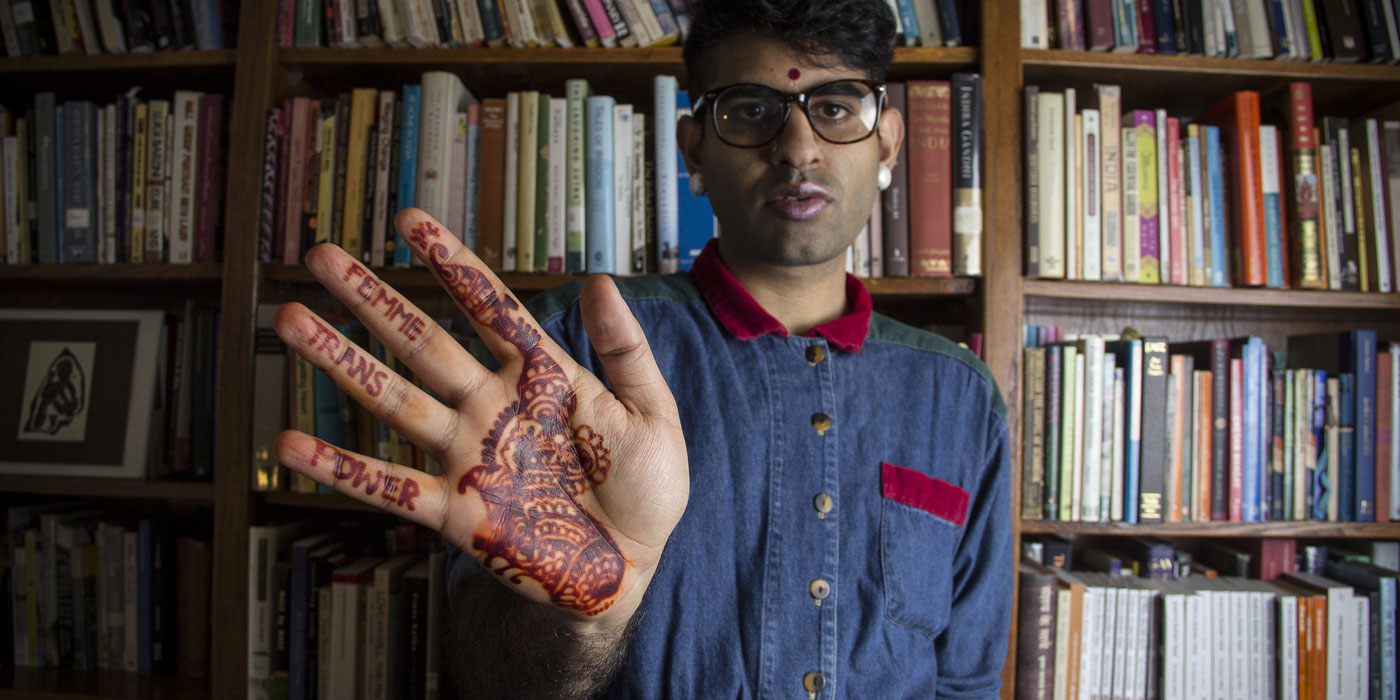 Alok Vaid-Menon is a poet, writer and performance artist, who identifies as a gender non-conforming person and uses the pronouns “they/them”. Accordingly, Alok will be referred to as such throughout this article.

Alok is spread out on a neatly-folded bed with crisp, white sheets; legs up in the air, chin in hands, wearing a white t-shirt and basketball shorts. It’s their sanctuary. This version of themselves, one of solitude, is so varied from the extravagance and panache that they expressively display when posting pictures of themselves on the Internet. It is this ability to float effortlessly between these two versions, the IRL and URL, if you will, that is central to Alok’s capacity to not only be what others have described as a trans-icon, but a role model to countless others. Without this required strength to revert to the truest form of themselves, Alok wouldn’t find the energy, the necessary multitudes required to fight a daily battle against patriarchy, cisgender violence and the torrent of harassment that they face.

Indie-rock from the early 2000s blares out of the laptop as we start talking, “I just love white male angst,” Alok says, “Because it’s so simple. It allows me to write about whatever because as a racialised person, you are not granted emotional complexity for yourself because you have no representations of yourself being emotionally complex. So I sometimes require white women and as a conduit because they are symbolic of feeling because I didn’t grow up being allowed feelings.”

Growing up gender non-conforming in Texas, Alok was never allowed to fall apart and so turned to artists that did. Avril Lavigne was one of these artists, “Avril’s a prophet,” Alok exclaims. “I love sad, white girl whimsical like kind of chill vibes. I just turn off the lights and I’m like, “oh my god, she gets me.” “Being the only brown kid at indie shows," they realised, “is that People of Colour actually have problems.”

As a child of Indian immigrants, their difference was evident throughout childhood. This caused Alok to delve into art at a young age, allowing them to start navigating the Internet - with all its perils and positives - at the age of 13. “I became Internet famous through my pseudonym Larry,” Alok says while sitting on the desk, foot bouncing along to the music, reminiscing. “ I started buddy icon making when I was 13; that was my first foray into the Internet on an icon making website. Moving into xanga, then MySpace, under the pseudonym ‘Waste of Paint Productions’, Alok would go home and “run a graphic empire for free because I didn't know how to monetise that shit at the time.”

For Alok, graphic design was pivotal at a young age as it allowed them to creatively hack a body: create a face out of plants, replace arms with legs; essentially take control of a body when they were confused about their own. The online community also helped them find an identity, “I didn't know any of these people I was speaking to online in this graphic arts community. I co-owned it [the company] with a girl named Meg who I don’t even know where she is now but we would literally just be on AOL like “Hey Meg did you do that?” Like, we were working together at age 13. It’s so intense.” They were also the first people Alok came out to as queer, “And they'd be like, we already knew.”

Moving to California for University was critical, “I was literally every iteration of alternative white culture when I was a teenager and I gained the language to understand why that was messed up when I was in California.” Alok was able to find a community, an identity and someone they could work alongside with in California; Janani Balasubramanian. The two of them created DarkMatter; a spoken-word poetry duo that has taken the world by storm over the last few years. Conceptualised four years ago to create art and figure out their world and how to fight it, the project came to a close earlier this year.

With Janani delving into play and novel writing, Alok started experimenting with performance art. “We were drawn to different art forms. We had to listen to our own creative impulses,” says Alok forlornly. For Alok, it also allowed them to come to Delhi and perform.

Having started writing poetry in their pre-teens, “My first poem was about domestic violence and having compassion for perpetrators of violence who were responding to violence that had been done to them in their past,” Alok has never been shy to confront the world where they face abuse on a daily basis. “[When I was like 13] I would submit my poetry to youth literary journals and they would report me to counsellors and be like this kid has depression. It's so annoying because all the [other] poems are about cheerleading and birds and animals. I wanted to talk about something real.”

And Alok did end up talking about something real with DarkMatter, launching themselves into the forefront of the trans-activist movement with it, “Gender is a caste-based, race-based, class-based construct. My critiques of gender don’t even come from being trans, but from being pragmatic on what global inequality looks like. We are never going to be in the same gender categories as our colonisers. I will never be the same gender as someone from a caste and/or class I am oppressing -- and to say we’re part of the same community is just reductive.”

“They want our narratives to be digestible but then what happens after we finish being consumed. I don’t want to be digestible. I want to give you fucking indigestion,” Alok says. “I want you to go the bathroom for five hours and while you’re there, read a book or two. I’m not trying to go down easy.”

The Internet has helped them with spreading this message. Alok, though, hates that the way they (and others) are perceived is by an understanding of who they portray on the Internet, “[I believe] there are as many you’s as there are people that you know in the world. If I was to ask your mom about you, she would know a fundamentally different person than the you that I know currently. The internet only portrays one version of you, not all your multitudes.” Alok wants people to understand this pivotal point and it’s a facet of their new work “Watching You Watch Me.”

In preparation for their show, Alok procrastinates. “I am the queen of procrastination!” Instead of writing and rehearsing, they have been organising their hard drive and creating a fashion line, “I'm designing my first set of clothing that I'm loosely calling a line because at some point, I was like, I'm going to make two new pieces but then I was like I'm going to make a line of clothes.” The vision is what feminine clothes would look like without fear of harassment because being in Delhi, Alok has noticed how “women and femmes are constantly self-policing [themselves] around society.”

Asking themselves when is it safe to head home, what can they wear to ensure minimal harassment but still be “fabulous and beautiful, because you’re trying not to draw too much attention to yourself while feeling good.” Alok says the line is “functional femme” as feminine clothes tend not to have pockets and they’re difficult to go to the bathroom in; Alok’s line will be the opposite of that.

At a rehearsal for the show, Alok is meticulous. With brows furrowed in concentration, wearing blue socks, platform shoes and a gorgeous patterned red dress, Alok swaggers around the theatre ensuring that every detail of their upcoming performance is perfect. A technology-heavy show, they’ve hooked up an iPhone to the laptop which then connects to the screen. A loop-pedal on a brown table sits alongside a glass of water as they’re precise and calculated about every minute, choosing to repeatedly watch videos and photos where people have abused them online.

Alok’s relationship with the Internet is a complicated one. It’s one they’re still navigating despite having prospered in it at a time when most were ignorant of its possibilities. Strangers will comment on their posts, on Instagram or Facebook, deriding everything about them, making vile comments that are past the point of violence, a torrent of vitriol accompanies every post with a picture of Alok. But it has given them strength. In an age where the world seems more divided than ever before, Alok is fighting for the kind of utopia where they’re not just accepted for themselves but can raise others around them to be on the same platform, “A large amount of my time is facilitating connections [around the world], building relationships between trans and gender non-conforming artists and activists. The Internet has allowed me to do that.”

After the preparation it takes to put on a series of workshops and two live shows, Alok needs a break. Central Asia with a close friend beckons before they take their show across the world, performing on stages across Europe and hanging out in London for an artist residency. Ever the creative, Alok is constantly restless and seems unable to idle until they have a world where “desire would not be bodily focused, it would be about committing ourselves to people’s spiritual centres. The more I write poetry, the more I perform, the more I’m committed to the idea of a non-embodied self. I acknowledge the history and power relationships that enable me to do this and I want to fight for a world where everyone is able to do it.”

You can follow Alok Vaid-Menon on Facebook and Instagram. Alok will be performing at Oddbird Theatre in New Delhi on 31 March and 1 April. To reserve your tickets, you can go here.