Sonic Discordance As A Study Of Human Absurdity: Hemant Sk's 'Everyone is Content' 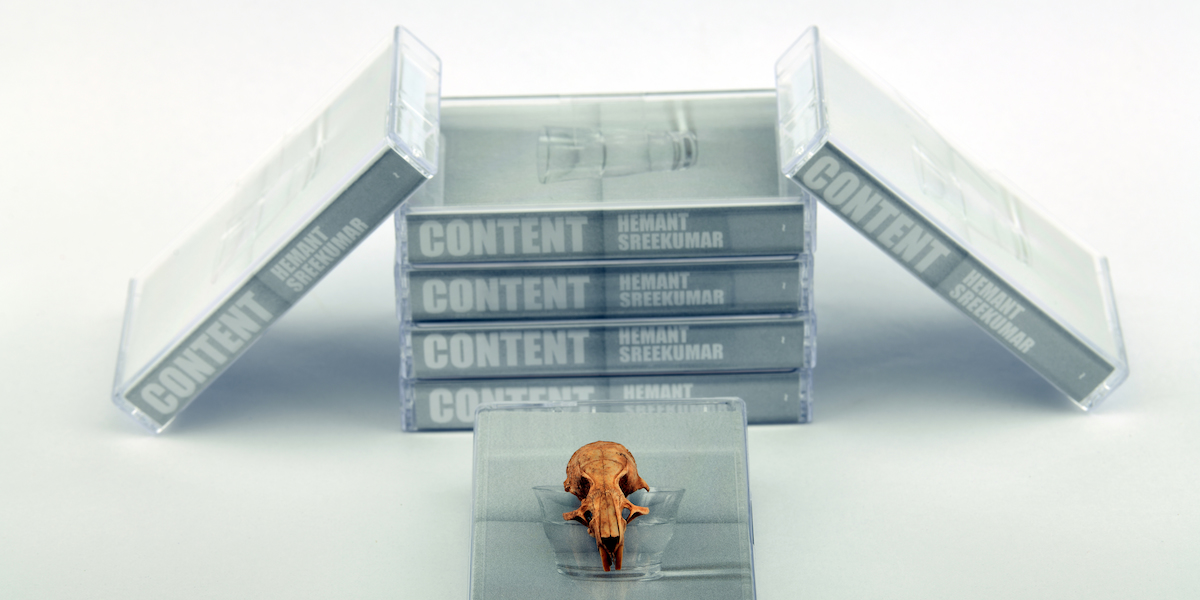 Hemant Sreekumar's second full-length album is, in many ways, a documentation of the absurdity of human existence. With digitised abstraction and sonic discordance, 'Everyone Is Content' is an exploration of the duality of the word “content”. Once just a signifier of the state of being satisfied or in peaceful happiness, modern usage of the term denotes the routine churn of digital media output, placing a commercial value to anything released for consumption on the internet.

It's intriguing how just the word in itself becomes a microcosm that represents the digitisation of humanity and the advent of late capitalism driven by manic consumerism introduced (largely) via the internet – consumerism that is more at display now, during a global pandemic-induced lockdown, than ever before (that I, regrettably yet admittedly, am an active participant of). If you have any doubt, take a moment to reflect on how many memes, videos, social media posts, news, series, films, music, mobile apps, playlists, newsletters or information you engaged with today, and consume on a daily basis. Or, as Hemant describes them, “everything and anything used as a piece of propaganda to validate the ideology of being in a state of permanent consumption”.

Humans, in this day and age, are constantly connected and, as Hemant Sk (known infamously through the independent music scene as the purveyor of harsh noise electronics and sonic art) puts it, content is now all about “internet corporations using human activity as capital to feed them back with services”, with content consumption being passed off as the “only path to self actualisation”, and content creation and sharing becoming the “path to self-fulfilment”.

These might sound like absurd, dadaist observations, or the rantings of a drug-addled or delusional conspiracy theorist, but when given due consideration, you'll find these are hard truths about our addiction to the internet, our incessant need for constant connectivity, our perpetual state of consumption, and our denial of the same. And Hemant recreates that feeling, the duality between the anxiety and pleasures of the permanent loop of consumerism, doing what he does best – through computational, coded, sonic dissonance and abstract noise.

The rhythmic, discordant noise and static on the album (which itself is titled 'CONTENT'), according to Hemant, crafts a narrative that reflects on how all human activity on computers inherently turns into data that is used to generate content by the consumer-tech industry. This results in tracks like 'Cloud Burst', which looks at a situation where data security breaches result in entire cloud infrastructures being compromised and user data being sold on the black market, and 'Total Engagement' that encapsulates people's addiction to finding instant gratification in endlessly manufactured content, reaching a state where pacification is achieved only by checking their mobile phones every minute. Artificial Intelligence is fetishised as the new god and provider of wealth on the oddly tranquil 'Back in the User' (yes, it is a wordplay on The Beatles' 'Back in the USSR’), and gains sentience with human qualities such as laziness, rebellion and carelessness on 'AI Retardation'.

As with any sonic experimentation, these themes and narratives are more intrinsically felt on the record and experienced than tangibly spelled out. Hemant's intention with his compositions was to attempt to capture the intense dual experience of calmness and catharsis created by constant connectivity: “The sounds capture the purest emotions towards the objectification of the user into content.”

That, perhaps, may be the reason you can almost hear a computer or a machine learning software on 'Virality Mining' sifting through user data to ultimately concoct a formula designed to make content relevant and viral. Or why the single 'Everyone Is Content' serves up the most ominous offering of the record, showcasing Hemant's sinister take on “the epitomisation of the Californian ideology of 'you are what you share/consume'” - a menial, oft-romanticised quote presented here with the horrific context of data mining, consumerism and subversive advertising.

The duality is most apparent on the transition from 'Digital Underclass' to 'Firewall Penetration'. Hemant's take on an Asian Dub Foundation track, the dramatic, war-like rhythms on 'Digital Underclass' are a portrayal of the disinformation bubbles crafted by communication softwares that can often trap internet users. Liberation ushers in, however, on the latter half of 'Firewall Penetration', the rhythms giving way to a wall of glitchy, pulsating drones.

Hemant composed these sounds last year during a winter residency in Paris at the Cite Internationale des arts, provoked by encounters with some abstract performances and the city's harsh noise scene. The sounds were all generated via coding, and recorded through Novation Audio Hub via Zoom H4n Pro – no DAWs were used throughout the process, apart from the mastering stage.

During the residency, at an Open Studio, Hemant presented cassettes of the project as a conceptual art-work, clubbing them alongside prints of a morse code rendition of the synthesiser code. This isn't the first time he has used cassettes for his projects – neither does it seem to be his last. Hemant is admittedly a stickler for the medium, and finds solace in the haven it offers, away from streaming services, and their associated “playlist, share, comment culture”. Cassettes’ archival quality makes them suited for long form recordings, and their physical presence, with artwork et al, is an added bonus, particularly for collectors and connoisseurs.

For the kind of ideas and themes that shape 'Everyone is Content', Phillipe Calia's album artwork, which simply portrays a glass of water, might be perceived as being disproportionately simplistic. Hemant, however, explains why it may be the perfect icon: “It could be half-full or half-empty. It could be water or poison or MDMA.” In other words, depending on the perception and individual understanding of the viewer, the artwork may represent: the hedonism of being “content” (as in satisfied, glass half-full); or it may serve a reminder of dissatisfaction and the need for gratification (as in the evils created by consumerism, the need to satiate discomfort with content, glass half-empty); or even perhaps the intrinsically deceptive nature of digital media and consumer technology.

'Everyone is Content' is, ultimately, driven by a binary – the duality between serenity and chaos, pleasure and anxiety, satisfaction and discord. And if you missed it in the sonic discourse or the artwork, it is reflected most aptly via the visual stream of the project, curated and edited by filmmaker, writer and founder of REProduce Artists, Rana Ghose.

The promotional videos designed for the album might be the most disconcerting, yet most unambiguous aspect of the entire project. They're also overwhelmingly uncomfortable, designed it seems, to generate discomfort, alienation and amusement. Hemant and Ghose looked at footage from several documentaries, all of which depicted people in a state of trance or hyper-engagement, and made a conscious decision to avoid any footage designed for the sole purpose of entertainment.

The result is an odd, perturbing collection of videos that range from visuals of people in a state of spiritual trance or flashing images of violent religious rituals (like a woman drinking a goat's blood from its fresh corpse) to a man shoving a mouthful of living bees in his mouth, to a video of dancers/sexual workers being grossly objectified and sexualised at a Pakistani wedding, to a scene from a film where a woman being sexually harassed by a man turns into a demonic, witch-like woman (a chudhail as we'd say in Hindi) and rips out his heart and lungs. There's varying levels of violence that tie the imagery together (apart from the video for 'Total Engagement' which merely portrays two seemingly new-age-spiritualists dancing very jovially with Bollywood-like moves in front of self-styled god man Nithyananda), coming together to present a documentary of sorts. Once you watch the videos – a rather difficult though engaging hour, I must say – the project elevates the discussion from the subject of mere “content” to delivering a commentary on human existence, like a Discovery channel show on the absurdities and extremities of human nature.

It dawned on me, as I watched the videos, why this particular footage had been selected. Hemant claims that they picked footage that had a lot of forceful physical exertion by people (“to humanise the synthetic acoustic matter”), and that they merely wanted to mirror marketing techniques by offering visual gratification to offset the abstract nature of the audio and market the release. There is, however, overwhelming symbolism leaking from the videos. To me, the videos portrayed how society capitalises on that which is supposed to make you feel content – like religion or faith – and turns it into a money-making, brainwashing, profitable business. The same way the people in the videos appear to lose their consciousness and are wholly consumed in the absurd religious/spiritual rituals, the same way the internet culture of consumerism and the manufacturing of content by digital media has pervaded and taken over the lives of people; the only difference is the latter process happened more gradually and subversively, and has been normalised.

Suddenly, the very purpose of the project appeared to me in a new light. And I realised, disturbed and uncomfortable as I was while watching the videos, I was also incredibly amused and fascinated. As I watched videos of people violently engaging with religion and spirituality and the supernatural, I became aware that I had inadvertently become part of that narrative, by finding entertainment and satisfaction in visuals of them, by consuming them, and by immediately reducing them, and their human experiences, to mere content.

**Hemant announced this Sunday, that since the initial print run on cassette sold out, 'CONTENT' has been reissued for a larger edition. You can purchase the album here, or place an order via the official website**